The Banned 4. Toys that we’ve seen banned or recalled in the past 10 years.

Spectrum Scientifics opened in 2007 with a load of great science toys for our customers. Since then we have seen many toys come, some toys go, and some toys get pulled from the shelves for one reason or another. Here is a list of the toys we have seen get removed from the toy list.

Note that this list does not include anything recalled due to potential ‘pieces break off and cause choking hazards’ and similar issues. We are discusing products that inherently had an issue that made them unsafe, or were used in an unsafe manner. This in no way claims to be a complete list.Merely the ones we have observed.

Not all of these things were permanently banned, either, as you will see:

It seemed awesome, metal rods and magnetic balls would be used to put together nifty shapes! Great! Sadly the shiny metal magnetic balls were too tempting to swallow and they were powerful enough that two of them could ‘pinch’ in a kids intestine.

Battat and other companies rereleased this toy design with more secured magnets and non-magnetic steel balls.

Similar to popular Water Marbles, Slippery Spheres, Orbeez, etc, except these Water Balz were big! Much bigger than the little marbles that were Orbeez & Co:

Sound great? It was! But then an abusive parent shoved one down a child’s throat and it expanded with the moisture,  causing about what you would expect to happen. Toy suppliers volutarily removed the product from the market. You can still get them, but they are sold as chemistry equipment/gardening items, or whatever is needed to not have children as the primary target market.

We never carried this item, because we tend to avoid premium show-based kits which often just cost twice the price of better science kits.  But here it was in all its glory: A fingerprint kit with a chemical that was 7% asbestos. Ooops!

This incident, along with several other famous cases (such as the Thomas the Tank Engine Lead Paint incident) showed there were many problems with sourcing products in China. Too many times corners were being cut, and dangerous products being substituted, and other safety issues. Toy companies that imported had to start doing local testing of the products for safety, and quite a few gave up mass-importation. In China, things got very ugly with at least one head of a factory traced back to the safety issues first imprisoning an investigating journalist then hanging himself. 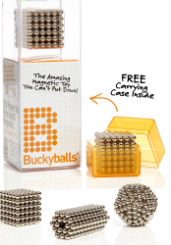 Incredibly popular when they were out, now these have almost been forgotten. Buckyballs were technically never sold as a toy for children, and the manufacturer took pains to try to keep them out of the hands of kids. But the Consumer Product Safety Commission, after adding on multiple sales conditions restrictions,  finally demanded the magnet sets be banned. The reasoning was the same as happened with Battat’s construction toy: kids swallowing the magnets would have them ‘pinch’ in the intestines. The company pretty much disappeared after this ban, but returned this year with a smaller, complient tiny magnetic ball kit.

But the magnet ban? It sent shockwaves through the toy indutry as toy sellers scrambled to remove the powerful rare-earth magnets from various toys.

Where the laser pointer opens.

So you want to view the Eclipse…