Aiming a telescope is tricky: It sees only a tiny portion of the sky, it might not be in focus for what you are looking at, and slight bumps can throw off your aim. That is why most telescopes come equipped with some kind of aiming device to help you find objects in the night sky. In the past this was almost exclusively with a Finder Scope – a little, low poweder telescope on top of the main telescope’s optical tube with a cross-hair that was used to aim.

The design of these little telescopes would vary from 20mm to 50mm in diameter, and the power was from 5x to 9x, typically. The holding bracket originally 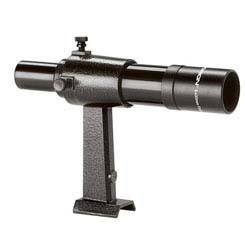 would be two metal O-Rings with three thumbscrews each to adjust the aim of the finder scope. More recently that design would be replaced with a single ring with two thumbscrews and a spring bracket. Those were the good ones, anyway. Cheaper telescopes would often have a plastic 5x finder scope with a single holding bracket with

three plastic thumbscrews that would often frustrate new telescope owners as this mount is clunk and hard to control and the optics in the finder scope were poor.

This frustration would lead to a buig change in smaller telescopes around 10-15 years ago as they switched from cheap finder scopes to using reflex finders.

Reflex finders, or red dot finders involve no magnifying optics. Instead the reflect finder has a window that you look through and a red dot is projected to show where the telescope is aimed. Adjustment is made by two knobs. This was much easier to deal with fot new astronomers as the main frustrations with cheap f 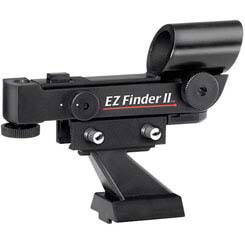 inder scopes were mostly alleviated by using a red dot finder. But unfortunately they were replaced with new issues. The first being that all too often the new astronomer would leave the Red Dot Finder on after the viewing session was over, which would drain the battery. Long term storage would also be an issue as many would forget to remove the battery and they might leak acid onto the electronics.

The final issue was that once the astronomer gains some experience they will not be able to use the Red Dot Finder for a technique that is ued by more advanced astronomers to find objects: Star Hopping. This is where the viewer jumps from star to star in the field-of-view of the finder scope to get towards an object they are seeking such as a small nebula or globular cluster.  The technique involves having one bright known star that is near another known star (not as bright) such that they can both be in the field of view of the finder scope. That 2nd start is then centered in the finder scope and a 3rd star that is near the edge of the field of view is found and so on. It is a tricky technique to learn and unfortunately you can’t do it with a Red Dot Finder.

SO which to choose? Well, some do not:

More determined astronomers will actually have both designs on their telescope. A red dot finder to easy aiming along with a larger finder scope for close work and star hopping. This may not be an option for those using smaller telescopes as they have limited space for such extravengance.

Here is a summary of the main points along with some other advntages and disadvantages:

Have fun viewing whichever you use!

We are proud to now offer a new line of very fast, very high-end 3D Printers. The fastest and largest 3D printers in the American commercial . The WASP Delta Turbo line:

As said this line features some of the largest and fasted 3D printers in the USA. Three models are available, the small WASP Delta Turbo 2040, the mid-range WASP Delta Turbo 4070 and the largest unit: The WASP Delta Turbo 60100 . The 2040 and 4070 feature turbo printing features such as turbo speed (printing up to 600mm/s, 400mm/s for the 4070). ALl the models can print plastic at different temperatures. The printers have extreme accuracy and operate from the same 1.75mm plastic material used in most 3D printers.

All the models feature the WASP “Resurrection System” where if power is lost, disconnected, or if the printer needs to be moved for some reason the printer will resume right where it left off when power is switched back on.

All  WASP units come with software that operates with Mac, PC and Linux. The format recognized are stl, obj, & gcode. The WASP printers have USB and SD inputs

The chasis and rails is an aluminum unibody, the rest of the unit is built with sturdy materials.

Now, of course 3D printing is a bit tricky, so all the WASP  Turbo Delta models include 90 MINUTES OF VIRTUAL TRAINING.

This truly is the top of the line 3D printer available commercially. Choose your tool for the future of 3D printing!