Have a safe and fun holiday, hope not too many of you got washed out of the weekend’s festivities

BenchMark has made a great improvement on one of their products! They have taken their excellent MyBath Mini Drybath and added a heated lid to produce the MyBath HL.

The heated lid prevents evaporation & condensation, a problem with regular drybaths that tent to only heat the bottom of the vials. Depsite this effective feature the MyBath is still small enough to fit in the palm of your hand! Like its little brother, the MyBath HL is quick to heat up – obtaining a temperature of 37C in just 2 minutes, with a high temperature of 100C. The temperature is also adjustable to 0.1C giving you excellent control. The MyBath HL is perfect for  when temperature sensitivity is crucial such as in immunoassays, LAMP assays, enzyme reactions, and more

Two blocks are available for the MyBath HL, one holds 24 x 0.5ml centrifuge tubes while the other can hold either 40 x 0.2ml tubes or 5 PCR strips with 8 tubes each.

Like all BenchMark lab equipment, the power us provided by standard US current, while a European powered version is also available.

The Digasaurus Sandbox – The Best Sandbox Ever!

We’ve just added the Digasaurus Sandbox to our online product listing – and its a real winner! This specially designed sandbox combines the love of kids playing with sand with the thrill of discovery! Kids can ‘dig up’ and expose the fossils on the bottom of the sandbox!

The Digasaurs Sandbox measure an impressive 64″ L x 47″ x 11″ h so there is plenty of room for kids to play. The sandbox was designed by renowned sculptor Timothy P. Schmalz and features impressive and accurate fossil replicas at the bottom of the sandbox. Here is an image of the Digasaurus Sandbox without any sand.

The sandbox includes a downloadable 12 page color field manual with drawings and interesting facts so kids will learn about each dinosaur they uncover.

One of the best features of the Digasuarus Sandbox is that it is designed to look like a ntarual feature – a rock. Unlike other sandboxes that contrast and uglify a yeard, the Digasaurus Sandbox actually compliments the yard. Take a look at its appearance with its lid on and it you’ll see that it looks like a large (albeit oddly shaped)  landscape stone!

Despite its appearance, the Digasaurus Sandbox is not made of rock, but rather a durable and sturdy plastic. The sandbox is made with non-toxic LLPDE plastic, manufactured in the USA. Likewise, the Digasuarus Sandbox is also made in the USA. The total weight without sand is 40 lbs. Sand, of course, is not included.

The Digasaurus Sandbox is that it is so large that it must be shipped by freight. Shipping is free.
The Digasaurus is a great addition to any backyard and costs just $399.95!

A larger Super-Size Digasaurus is also available for schools, parks, and other facilities – this unit measures 90″ diameter. Contact us for pricing and availability.

Want to buy the Digasaurus Sandbox?

Mercury Getting a Little Pockmarked!

Mercury is the innermost planet in our Solar System, and until recently it was mostly considered to be unchanging. Scientists having sent a couple of probes towards it conclided that there wasn’t much changing on its surface. That is, until the MESSENGER mission  started sending back images of the surface that showed some rather odd changes to Mercury’s surface:

These pock-marks, or hallows were found on Mercury’s surface and were as big as a mile across. The weren’t impact craters as they were not deep enough. While rockey planet surfaces are not uncommon in our Solar System (our own Moon and many of the outer planet’s moons).

The likely culprit would seem to be minerals brought to the surface by actual impacts – the dramaticly changing temperature of Mercury’s surface means some elements and chemicals might be ‘erupting’ in a chemical, rather than a geological volcano of sorts.

In any case, it sheds some interesting light on little Mercury. You can read more as the story develops on NASA’s webpage

This is great little entertainment that fits easily on your desktop. Inside, two little artificial  fish bounce around the bowl, driven by forces unseen!

Of course, it isn’t magic that powers the fish, but magnets! Two ‘AA’ batteries (not included, by the way) manipulate magnets in the fake fish to cause them to move around!

The Magic Fish Bowl comes with the bowl, two fish, some beads for color, and the faux-rock base that holds the power system and batteries. You provide the water (distilled preferred).

So how about a video? Here’s a nice short one we took!

Metal Marvels – You build them

Sorry we missed yesterday’s blog entry, but we were getting a lot of new stuff in stock, some of which is really cool. We are especially fond of the new Metal Marvels. These are models that come flat. You punch out the laser-cut pieces (or use a cutting tool if needed, and assemble them to make cool metal models. Each model is about 3-4″ tall or wide. Some examples of these kits are The Chrysler Building

Or perhaps the Golden Gate Bridge 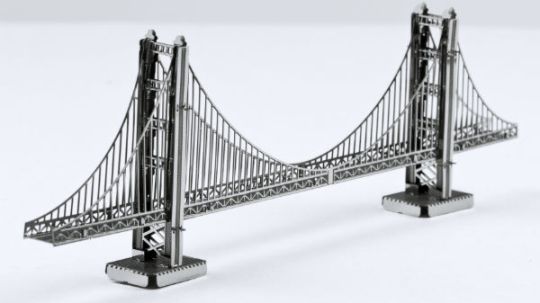 More mundanely, but no less impressive are models like this Jet Plane 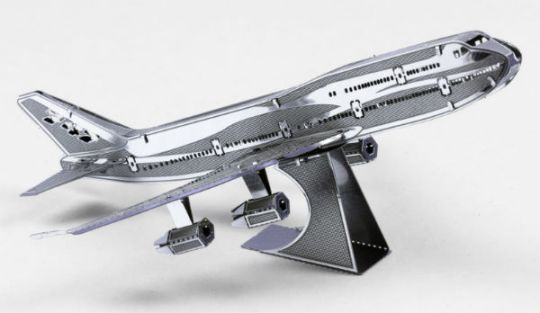 Or the WW1 Classic Fokker DVII

There are plenty of models to choose from and at just $7.99 each they make great little gifts or stocking stuffers! Pick some up today!

OK, so pretty much everyone who has been on the internet has had a chance to see the classic Geyser Tube in action – The tube drops the Mentos into the soda bottle, the surface collects the fizzy bubbles and soda come streaming out. Great times! But now there is great new product that takes advantage of this little trick: The Great Geysers Soda Geyser Car

The idea is simple, since soda shoots out real fast when you drop Mentos into it, there should be some reaction to that action. I mean that’s just basic physics, yes? In this case the kit is assembled like a car, but is based around an empty soda bottle. You pour in the soda of your choice (this lets you try different ‘fuel’ experiments) drop in the Mentos and watch the car race off! It goes from 100-200 feet on a ‘charge’ of soda and Mentos. Detailed instructions explain how to assemble the car, how to run the basic car launch, and how to try different experiments with other sodas and such. In classic BeAmzing style the instructions are written for both kids and parents.

The Soda Geyser Car is a great little piece of equipment for Science Fairs to show how different setups can be done and tested. The instructions help out with that part as well!

So take the Mentos & Soda to the next level and have it move a toy car!

So now you;ve used your new telescope to view the Moon and most of the planets. So what is next? The answer is: Deep Sky Objects (DSO). These are the ‘faint fuzzies’ that exist well past our Solar System (in fact most are out of our galaxy). They are faint, but they are beautiful to view. The trouble is, DSOs are almost invisible to the naked eye, unlike the objects we described in previous entries of Astronomy Hints (Uranus, Neptune & Pluto excepted). This means that there is a lot more work involved in trying to find DSO’s. You will need a few tricks and in some cases computer aid to help you find them. But for now, we will stick with a couple of the easier ones to find.

We’ll start with the Orion Nebula. As the name implies it can be found in the Constellation of Orion:

Orion is one of a few Constellations that can be found easily. It is even visible in Urban skies. It comes up  in the southern sky during the late Fall and stays around for much of the Winter. The running joke about Orion is that it is one of the few Constellations that actually looks like what it is suppose to represent (i.e. a Hunter with a bow or club). Now the Orion Nebula is classified as M42 in the Messier catalog (more on that later) . From the above graphic map you can see how it sits below the three stars that make up Orion’s ‘belt’. If you look at the actual constellation with your naked eye and look at where M42 is supposed to be you might actually get an impression that there is something there – but you can’t quite make it out. This is trick your eyes are pulling on you since the object is so faint – the nebula is just bright enough to activate the Black & White sensing Rods on the edges of your pupils, but not bright enough to activate the Cones that see color (and need more light).

Since Orion is the 2nd brightest Deep Sky Object visible in the Northern Hemisphere (the Pleides is first, more on that later) it is probably the best subject for your first DSO. It should be fairly easy to find with your telescope’s finder scope, or you can just eyeball it from the belt of Orion. It is fairly large so you should be able to find it without too much trouble. 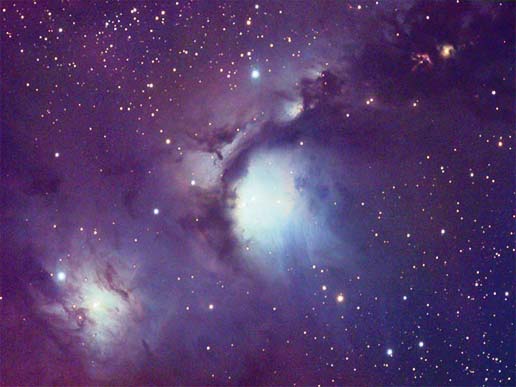 Now this image can give you a decent idea of what the Orion Nebula looks like, but in reality there will be some HUGE differences. For one thing, you will not see any color, nor will you see that much detail, nor will the image be as crisp, nor that bright. Sorry about the deception but most folks need to know that the color astrophotographs and Hubble images they see in books and on the internet are not what you will see in your starting telescope. These shots are long-exposure with a lot of work and time going into them.

That being said, your first glimpse of a Deep Sky Object can still be breathtaking – it is also the first step in seeing the real value in astronomy. Many folks with telescopes limit themselves to just the Moon, or the Moon and Planets. With DSOs there is so much more out there to see!

Next issue we will try a couple of the more: the Pleides and the Andromeda Galaxy!

Hi Folks, Sorry but no update today as we have been changing over to the new computer and it is being surly and annoying. We will be back tomorrow with lots of good stuff. Promise

The skyrocketing price of rare earth magnets has left its mark in the toy and science world. Even with the recent price crash many toymakers are still dealing with much higher prices than from a couple of years ago. So sadly this means that the classic BuckyBalls would be priced at over $40 a set – a bit too high for most people to spend on a small toy, no matter how addictive.

So enter BuckyBalls Sidekick. The same classic toy but at an affordable $24.95 and in a 5 x 5 x 5 cube. The magnets are the same, but you aren’t forced to buy as many and you can still mix them up!

The Sidekick also comes in the Executive Edition colors as well, The Gold

And the Silver Sidekick

All of which have a cool contrast and color compared to the standard nickle-coated Buckyballs.

This new book is 80 pages of pictures, tips, tricks and other fun things to do with your BuckyBalls! hexagons, cubes, and much more! Your BuckyBalls may have come with an instruction sheet, but nothing like this!