For a long, long time it seemed like the parts of our solar system were pretty well fixed and decided. Since the discovery of Pluto not much was changed. Sure, we discovered more moons around Saturn and Juptier when various probes flew around them, and discovered less prominent rings around gas giants not named Saturn, but for the most part things did not change. That is, until we started discovering a bunch of trans-Neptune objects and a lot of conventions went out the window: Pluto was demoted to Dwarf Planet status and despite people holding popularity contests to re-instate it as a planet it has remained a Dwarf Planet

But this sort of thing is actually nothing new. In fact the history of Solar System astronomy from Galileo to the present day is riddled with odd controversies like naming conventions, egoism, nationalism, lost chances, new classifications & credit-stealing  that have dogged the history of local astronomy. Here are just 10 incidents or controversies to make realise that the reclassification of Pluto wasn’t anything new.

10) Nationalism rears its ugly head: Uranus was discovered in 1781 and its discoverer, Herschel, wanted to name it after King George III. So he 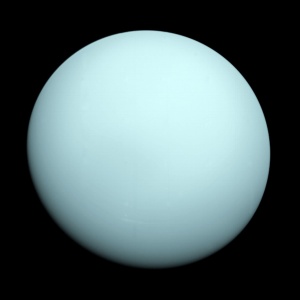 “Named after a mortal King? How gauche!”

termed it ‘The Georgian Planet’. English sky almanacs listed it this way for decades, but needless to say it was not a popular convention outside of England. Other suggestion made were to name it after Herschel, or call it Neptune(!). The final decision was not made until 1850 to name the planet Uranus.

9) Egoism rears its ugly head: Neptune, the furthest planet from our Sun (now that Pluto is a Dwarf Planet), was discovered by astronomer La Verrier in 1846 (he did not actually first observe it, he did the

“At least you were named after a King!”

calculations as to where it could be found). Once discovered, La Verrier wanted to name the planet after himself. To support this naming convention, France released almanacs that listed Neptune as La Verrier and Uranus as Herschel. This did not placate England (who felt that their astronomer, Adams, deserved credit – more on that later) much less the rest of the astronomy world. The name Neptune was suggested, and Laverrier as a planet name lasted only a short time (Georgian Planet, however, lingered).

8) I’m a planet! No, I’m not! Pluto’s demotion is not a new thing. The asteroid Ceres was discovered 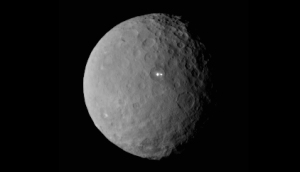 in 1801 and was quickly classified as a planet. But less than a year later more asteroids were discovered and classifying them all as planets was problematic. It took a while for the convention ‘asteroid’ to be accepted and Ceres was listed as a planet for decades. Now with the new classification of Dwarf Planet, Ceres has been promoted from an asteroid to a Dwarf planet as it fits all the criteria given for that designation.

7) Almost got it! Galileo almost discovered Neptune. In his notes he observed the distant planet while observing Jupiter. The two planets were very close while he was observing. However, Neptune was undergoing its retrograde

motion (where the planets go backwards in the night sky because of the motion of the earth around the sun) and appeared motionless. Galileo considered it to be a fixed star and ignored it. His telescope was not good enough to show details that might indicate it was not a star. Centuries later, an examination of his notes and diagrams was done because someone realized that when Galileo was observing Jupiter when it was in Conjunction with Neptune. Sure enough, it turned out that Galileo was the first human to view the distant planet due to some pure luck, but he couldn’t determine what it actually was.

6) Credit where credit isn’t due: La Verrier wasn’t the only astronomer to lay claim to discovering Neptune. English astronomer Adams also claimed that his calculations led to its discovery. This of course

caused butting of heads between English and French nationalist astronomers. Finally it was agreed that they would share credit as co-discoverers. However, over a hundred years later, serial credit denier Dennis Rawlins claimed that Adams did not deserve credit for co-discovery as his calculations were way off and almost more harmful than useful (The actual poisition of Neptune was 1 degree from where LaVerrier claimed and 12 degrees from where Adams claimed). It turns out that Rawlins was correct in this case. International astronomers examined the evidence and found Adams should not deserve credit for the discovery. LaVerrier is now considered Neptunes sole discovered. This decision was not made until the late 1990’s.

5) “But, we’re not of Greco-Roman Origin!” The planets are named after Roman gods, which where stolen wholesale from the Greek gods. But Greco-Roman culture did not permeate the entire word. What about Asia? Africa? Native Americans? Indians? Arabs? Well, on the bright planets all of these cultures have their own names. But when it came to the outer planets they were surprisingly clever at adhering to the naming convention. Most cultures, for example, name Neptune after their own historical sea-gods. If they didn’t have a sea-god they would name them after sea monsters. Uranus was a bit trickier as it was a sky god and many cultures do not have such a equivelant diety, so names like ‘Sky King Star’ or ‘Sky God Star’ become the convention.

4) Vulcan, the non-planet (No, we are not talking about Star Trek): When an odd pattern in Mercury’s orbit was discovered in 1859, Newtonian physics could not explain the problem. A solution was suggested that another planet between Mercury and the sun existed that was exuding gravitational force on Mercury. Did we mention this was suggested by LaVerrier, the Neptune discoverer? He suggested this planet be named 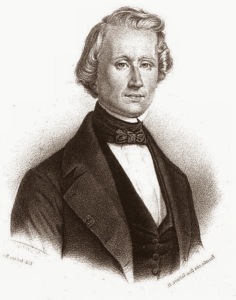 Just get used to me.

Vulcan and requested astronomers search for it. Soon after this was proposed many folks started claming to see this theoretical planet either transiting the sun or with direct observation. Most of these observations were unfounded or unreliable, but one done by astronomer Lescarbault was enough to satisfy Laverrier and he announced its discovery in 1860. Many astronomers were skeptical, and there were many false alarms with sunspots being mistaken for Vulcan. But the problem of Mercury’s orbit remained. Laverrier died and the search for Vulcan waned. In 1915 Einstein solved the problem as being an effect of the strong gravitational effect of the sun having a relativistic effect on Mercury that was much diminished on further planets.

3) Canals on Mars: In the later 19th century, several astronomers reporting seeing ‘channels’ or ‘canals’ on the surface of Mars. Some of them were even mapped. It was even suggested that these channels were artificially

dug canals that showed intelligent life on the red planet. As telescope optics improved it was noted that reports of canals dropped off. It turns out that seeing canals on Mars was actually an optical illusion that was an artifact of lower-grade optics. A few adherents stuck with these old canal reports until Mariner 4 mapped the martian surface and showed no such features.

2) Planet X: LaVerrier (again!) noticed some oddness in the orbit of Uranus in the 19th century, this was confirmed by several other observations. It was proposed that a large planet, designated ‘Planet X’ existed past Neptune that was causing this

I’m not Planet X, but I have a heart!

orbital issue. When Pluto was discovered it was hoped that it was the answer, but Pluto turned out to be too small. Several other searches for Planet X were made but turned up nothing. Some crazies got a hold of the idea and imagined it was doing ludicrous things like hiding behind the Hale-Bopp comet. Eventually the Planet X hypothesis was abandoned when space probe data revealed the error in Uranus’ orbit was caused by a overestimation of the mass of the planet.

1) Phaeton & Titus-Bode Law: You doubtless know of Newton’s Laws of Gravitation, and have probably heard of Kepler’s laws of Planetary Motion. But have you ever heard of of the Titus Bode-Law? (someties just called

“Everything is fine so fa….awwww”

Bode’s Law). This was a Law that stated that each planet orbiting the sun will be approximately twice the distance from the previous planet. So Venus will be twice the orbit of Mercury, Earth twice the orbit of Venus, etc. This Law got a boost when it was used to find Ceres, which filled the gap between Mars and Jupiter. Since Ceres was not an impressive planet, some proposed it was actually part of a broken or exploded planet they dubbed Phaeton (and idea still suggested by pseudo-scientists today). The discovery of more asteroids lent hope to this idea, but the total mass of the asteroids later found was not enough to make a ‘real’ planet. Bode’s Law got a boost with having an approximate location of Uranus, but flopped badly when used for predicting Neptune’s location.  The Law is now obviously discredited.