One of the more popular items we sell at Spectrum are pens that use invisible ink that only show up under ultraviolet light. The most popular ones actually have the ultraviolet light built right into the pen!

The Ghost Writer has all the features of older models but at a much lower price (under $4!).  It has the invisible ink pen, the regular pen head, and the ultraviolet led flashlight. Batteries are included!

To use it, all you need to do is write whatever you want. You won’t be able to see it of course, its invisible! But then you shine the ultraviolet light onto the paper and voila!

Additional Note 8/26/14: Sadly this product has been discontinued by the manufacturer. There were some reliability issues but we feel they could have been solved. We are sorry to see this item go.

We were stunned when we first saw this little geek gadget. It just keeps on delivering goodies! Its the 7-in1 Laser Pen and that title doesn’t even begin to describe how much this little pocket sized tool can do!

First of all let’s have a look at it:

So far, it seems simple.

Its kinda in the title, so no surprise

Of course, it is in the description, so we are certainly going to have a laser pointer in this thing. And we do. A class IIIa 650nm laser pointer is at work here.  Great for any purpose you might need a laser pointer for, which means pointing things out to friends or making cats go crazy. 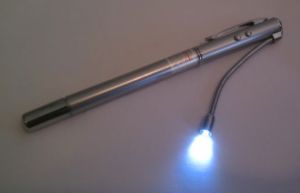 Next up is the LED snake light. This is a standard white LED bulb that remains on after you push the button. The snake coil can be positioned almost anyway you like to shine light where you need it.  Press the flashlight button again and…

…you’ve got an ultraviolet light! This is another LED light that emits at 395-400nm and can be used to check special features on drivers licenses, credit cards, or to check UV sensitive invisible ink

Now of course, with all these gadgets and parts the old joke comes back about the watch with so many features it doesn’t have room to show what time it is.

Well this should establish that this thing does actually have a pen in the laser pen,  and yes. It does write! Mind you, you will have to unthread that cap. It doesn’t just snap off like many pen caps. And there is a reason for that:

That reason is that the cap is part of the pen’s extending magnetic pick up wand! At full extension (this is not show at full extension) it is over 17″ long and the magnetic cap can pick up any ferrous item that isn’t too heavy for it. Here we see it holding a flat watch battery (it was all we could find).

That’s quite a list of features! But wait, you want more? Well we did say this was a 7-in-1 Laser Pen, and so far we only have five. Well if you unscrew the central body you get this! 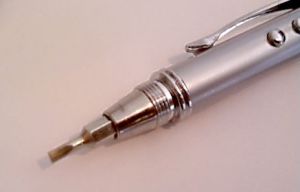 That’s right, is a mini flat-head screwdriver! A 2mm flat head screwdriver to be exact. Handy for certain electronics and other small screws!  But just in case you have to deal with electronics where a lot of philips-head screws are involved you can simply pull out the screwdriver head and flip it around to get: 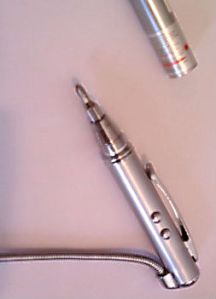 What doesn’t this thing have?

A PH00 Philips-Head screwdriver! (You’ll have to take our word for it…this picture didn’t come out as well as we might have liked).

The Laser Pen has other features as well, such as a metal body and a sturdy pocket clip. The laser is FDA approved and all the lights run off 3 x AG3 batteries, the batteries are most certainly included!

Grab one of these awesome little gadget pens today!