Archive for the ‘Science History’ Category

Making and Using an Astrolabe (a Paper one, at least).

Astrolabes are ancient  astronomy & navigations instruments mostly used to measure the angle an object in the night sky is above the horizon (or the sun and Moon during daytime). They were invented in Greece but were much improved and developed in the medieval era by Muslim astronomers. They were wonderful and artistic instruments, but for most people making their own version isn’t likely to happen as they are not trained brassworkers. 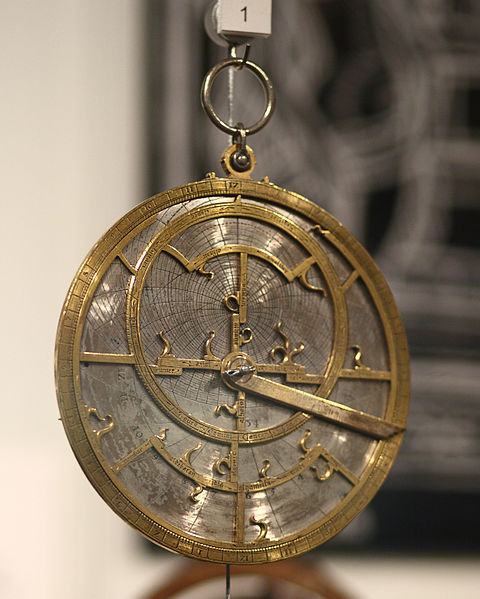 END_OF_DOCUMENT_TOKEN_TO_BE_REPLACED

Spirograph has a long history as a toy – dating back to 1965.  Its actually not the original – as the copy above says it was based off a drafting tool invented Denys Fisher. It probably looked something like this tool from 1968 (scanned from the Edmund Scientific 1968 catalog). 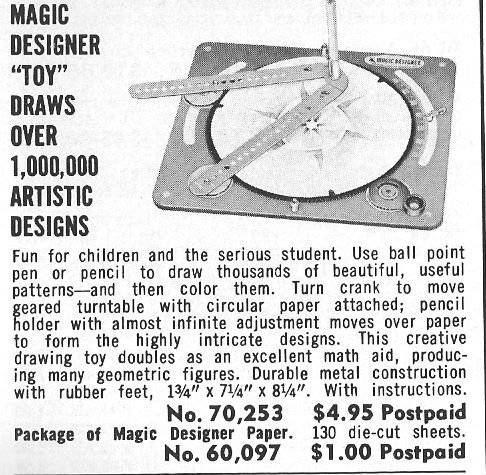 END_OF_DOCUMENT_TOKEN_TO_BE_REPLACED

We often get asked what science toys are good for very young children (3 and younger). To be perfectly frank there aren’t a lot of science toys for such a young age group – certainly there are a lot of learning toys out there, but at such a young age a child’s cognitive learning process doesn’t really distinguish between being fascinated by the everyday world vs. stuff chosen specifically for science education. What that essentially means is that a very young child will probably learn as much from bouncing a rubber ball vs. a toy designed for science education.

Still many folks want something for younger kids, and that’s usually when we suggest Constructive Eating. It is a series of eating utensils designed to look like construction toys! While strictly speaking this is more industry, construction & engineering than science we felt it was well within the boundries of learning to carry the line.

The basic line consists of three utensils, the first up is the Fork Lift Fork

This fork is designed to resemble a fork lift with the tines in place of the fork lift’s regular forks. All of the constructive eating utensils are made in the USA, are completely dishwasher safe, contain zero phthalenes,  and have no moving parts (the wheels are for show). The size of the fork utensils are meant for young children’s hands and they have a handy rubberized grip so that hold the, is easy, even during energetic play.

The next utensil is the Front Loader Spoon: 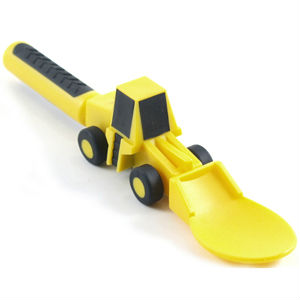 Front Loaders are the big construction machines used to push large amounts of dirt or other material around. For the Front Loader Spoon the shovel has been replaced with a conventional spoon bowl!

One might expect the utensils to be “fork, spoon, knife” but the makers of Constructive Eating decided to do a little twist on things. Instead of a knife they actually made a utensil that kids would actually use. Anyone who has watch very young kids will know that the primary purpose of a knife for them is to push around the peas and other things on their plate. So why not make a utensil for that very purpose. Hence the Bull Dozer Pusher!

Instead of a knife blade, you have a Bull Dozer’s shovel to move things around. Those peas don’t stand a chance!

The utensils are great fun, of course, but they would be more enjoyable if there was some place to play with them. Taking them out into the sandbox seems a tad unsanitary to us, and a regular plate can be rather featureless, so for that end we have the Construction Plate:

The plate is as well designed and constructed as the utensils (Made in the USA, pfthalne free, etc). It has nice features such as a place for the utensils to rest.

A neat row of imprints around the outside.

The plate is sectioned off like a kids plate, but there is a special place for kids to bulldoze their food onto the fork or spoon!

Want to buy other toys for very young children?

This has not been a good year for the founders of famous Optics companies. As you may recall, Norman Edmund, founder of Edmund Scientifics died back in January. Now we have been saddened to learn that Thomas J. Johnson, founder of Celestron Telescopes.

Celestron Telescopes was founded in 1960 by Johnson who was able to make Schmidt Cassegrain telescopes at an affordable price. The company grew on this strength, starting with just a 6″ model but soon expanding to Schmidt Cassegrains that were as big as 22″ across.  These Schmidt Cassagrains were generally lacking a corrector plate so Johnson and his engineers worked on a solution to properly manufacture the front collector plates. This led to the Celestron 8, which revolutionized amateur astronomy.

Johnson sold Celestron in 1980 and the company has gone through several iterations since then. It is still privately owned and operates out of Torrance, CA.

Happy President’s Day and an anniversary of a Space Milestone

Its President’s Day, but it is perhaps more important to note that today is the 50th anniversary of John Glenn’s orbital flight on the Freedom 7!

John Glenn was not the first person in space, but he was the first American in space, and while the USSR was racking up a lot of ‘firsts’ in the

Space Race but the the Mercury program  was actually much more effective research and testing for space exploration in the long run.

That’s all for today. Its kinda busy here!

Building a Stonehenge – without the Woo.

We’re out at a trade show today so today’s entry will be a bit brief: Many folks have

come up with ideas as to how ancient Briton’s moved the heavy stones that make up Stonehenge. Some of the theories make sense, but many of them are a wee tad…speculative, to be kind. Aliens, psychic powers, and other crazy concepts make up just some of the wilder theories out there.

But in all likelyhood the way the stones were moved might have been just some wood and pure human ingenuity. At least one man, W.T. Wallington, has come up with ways to move stones as big as those at Stonehenge pretty much just by himself! Not only move the stones but raise them as well. All of this with just some basic tools, simple machines, wood, and some full-scale replica stones.  Sometimes it is easier to just let you watch the action rather than try to explain it:

Excepting the fact that his stones seem to be made of concrete (which actually makes them more brittle than the original stones) and some minor updating of certain tools (such as using a hose instead of buckets of water) everything he uses would have been available in some form to the ancient Britons. You can see more of his moving objects in action at his website.

As amazing as W.T. Wallington’s work might be, he may not be the first to revive such techniques. The builder of Florida’s Coral Castle, Edward Leedskalnin, may have also employed such techniques to build his masterpiece. There is evidence that Leedskalnin may have cheated a tiny bit as a small Ford engine does appear in some of the rare pictures of his construction. Oddly enough, Leedskalnin is often subject to as many rumors of bizarre techniques as Stonehenge’s builders.

The reality is that we should never underestimate human ingenuity.